Back to Community Company Highlights 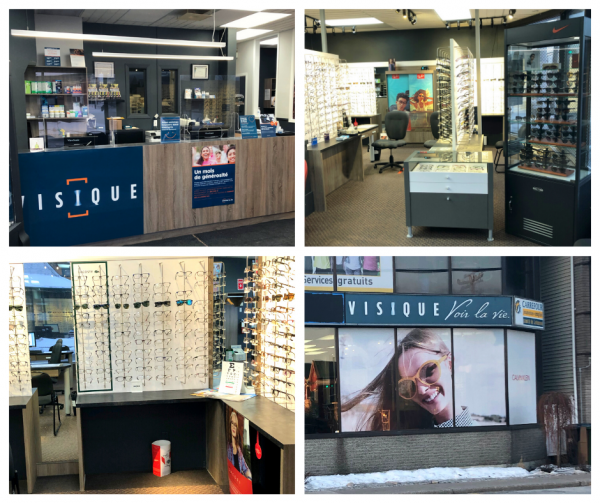 Located just outside the train station in the charming small town of Acton Vale, the clinic has been at the heart of the community since 1988. Visique Acton Vale’s dedicated team specializes in comprehensive eye exams, myopia management, contact lenses, industrial glasses, ocular emergencies, imaging, and more. Meeting the eyecare needs of their patients is a passion for the entire team.

We caught up with Dr. Blouin, Dr. Pharand, and Dr. Beaulieu to learn more.

Dr. Charles-David Blouin earned a doctorate in optometry from Université de Montréal in 2019. Over five years of his intensive studies, he acted as treasurer on behalf of his student association. He completed an internship at a veterans’ hospital in Rhode Island: The Providence VA Medical Center. During his studies, he took part in a humanitarian trip to Moldova. This exciting opportunity involved screening for pathologies and providing an extensive array of eye care to a population in need of support. In 2017, he successfully completed a Student Fellowship at the American Academy of Optometry (AAO). Dr. Blouin is always searching out research in the latest advances in ocular health and pathologies, and he is fascinated by the ever-changing technology in the field of optometry.

Dr. Éric Pharand graduated from the School of Optometry at the Université de Montréal in 1995. Although a native of Montérégie, Dr. Pharand also spent time in other provinces, practicing his profession in the Vancouver area for more than 20 years.

Dr. Beaulieu began practicing optometry in Sept-îles, Quebec, in 1976. He was one of the first optometrists to operate his own optics laboratory in 1979 that would compete with the major optical players that controlled the area of industrial safety glasses He developed a network of several clinics on the Côte-Nord in the Gaspé Peninsula and in other parts of Québec, contributing significantly to the exemplary geographic distribution and breadth of care in the field of optometry available to the province.

Dr. Beaulieu was the original founder of a grouping of regional optometrists who gave birth to the IRIS and Optovision banners in 1988 and has been actively involved in two optical cooperatives: Regard Action and Cooptic. Although he practices optometry, Dr. Beaulieu specializes in contact lenses and has been interested in the practice of orthokeratology for the past 25 years. Practicing at the Rosemère clinic since 2003, Dr. Beaulieu has contributed to the development of the Optique Expert banner in the Laurentians.

In 2010, his work was acknowledged as the School of Optometry of the University of Montréal awarded him the ‘’Builder’’ tribute in the entrepreneurship category, along with 100 other fellow professionals. In his spare time, Dr. Beaulieu is an aviation enthusiast and holds a commercial pilot’s license. He has been proud to be a part of the Visique family since 2015.

Book an appointment at your local Visique clinic today.